People have been living on Brandberg for the last 10 000 years but the people that did the rock paintings probably lived here only in the dry season. At Brandberg you could find water all year round.

There are some 1000 sites on Brandberg with paintings and a total of some 50 000 depictions. Of these 70 % are humans and 20 % animals (most of them large animals not found in the Brandberg area).

Some of the paintings in the Brandberg area are believed to be almost 5000 years old. The oldest paintings are made in one colour only, brown or reddish brown.

Paintings from different periods are found on the same place, sometimes one on top of the other. The more recent paintings are done in up to four different colours. The colours were made of iron oxide, red haematite, yellow ochre, black manganese and calcium carbonate. These more colourful paintings are made within the last 2000 years.

This was the end of the rock painting traditions and the painting sites were abandoned some 1000 years ago but people were still living here 500 years ago. Many of the cultural traditions shown in these paintings are however still part of the bushman or San traditions where dancing is made in similar ways and with the same accessories. The San also use trance dancing for healing purposes. 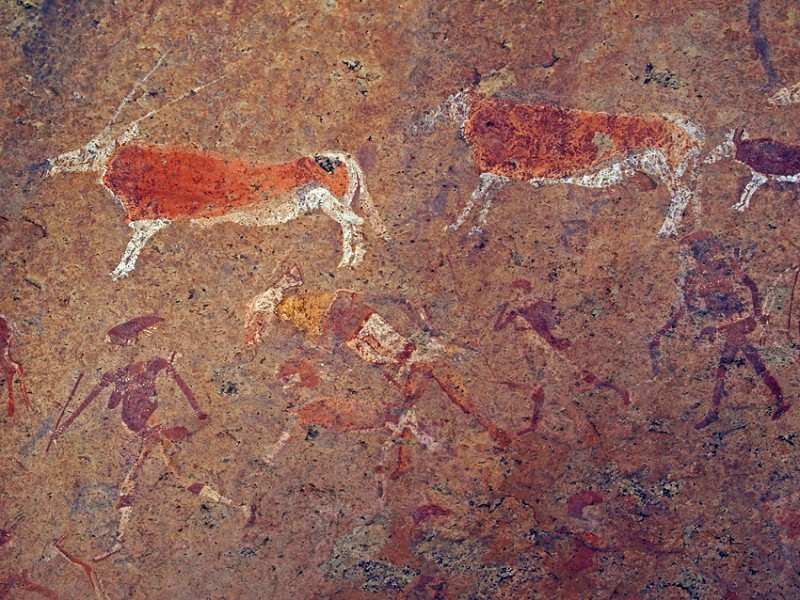 The rituals were held for different reasons like healing sick people or making it rain or just as social events. During these rituals the men were dancing with rattles around their ankles. Sometimes women were part of the rituals – dancing, singing and clapping hands. 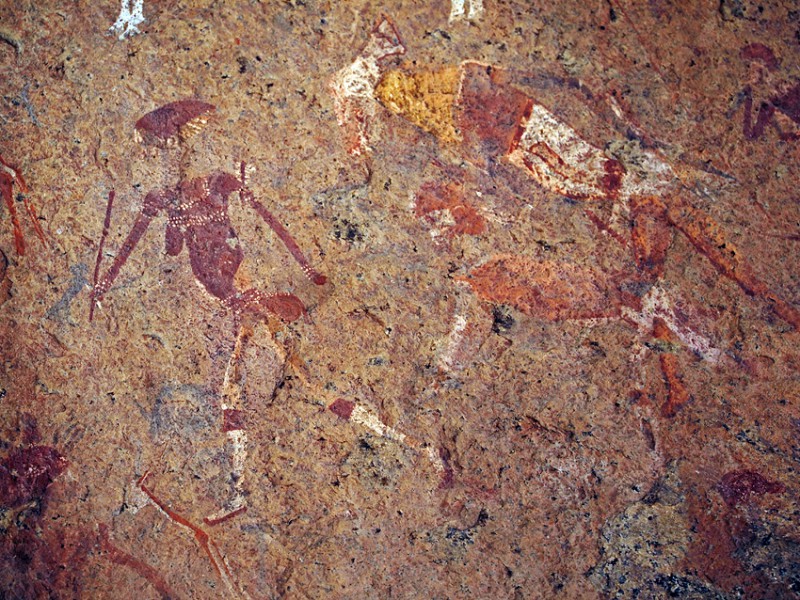 During the long dances they started swetting and sometimes their noses started to bleed. The sweat was thought to have a healing effect. 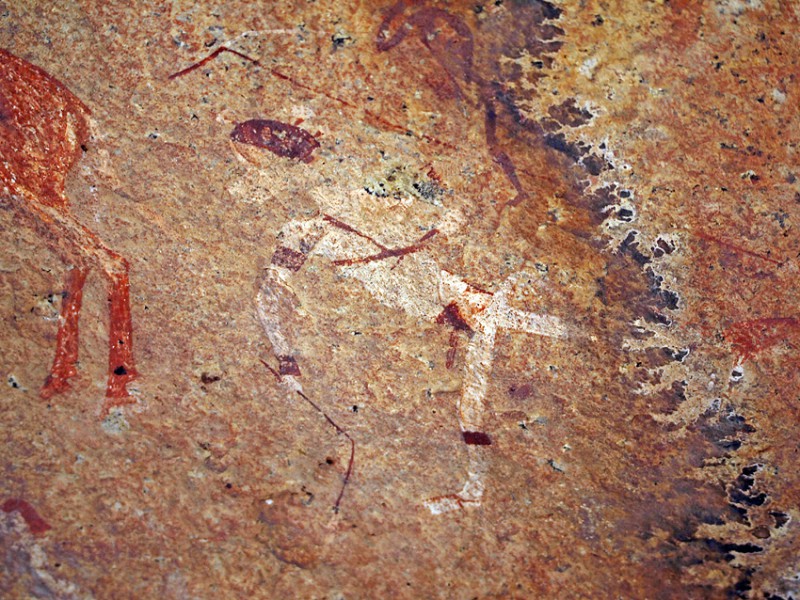 It is believed that the dancers got into a trance where they felt transformed to animals. In the paintings you see animals. They are male animals like the dancers and some paintings show animals with human body parts… 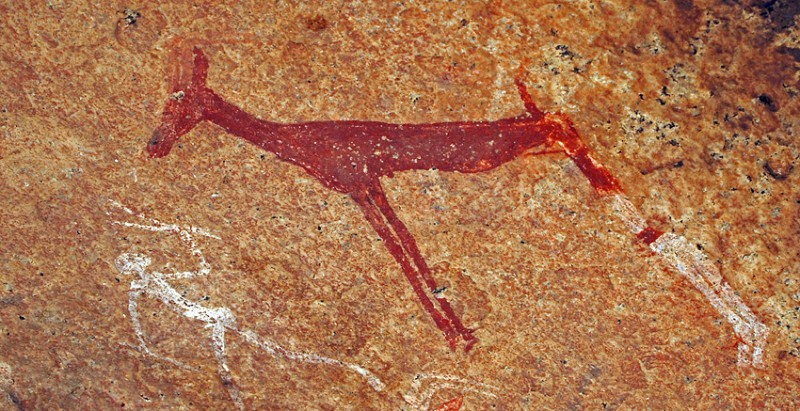 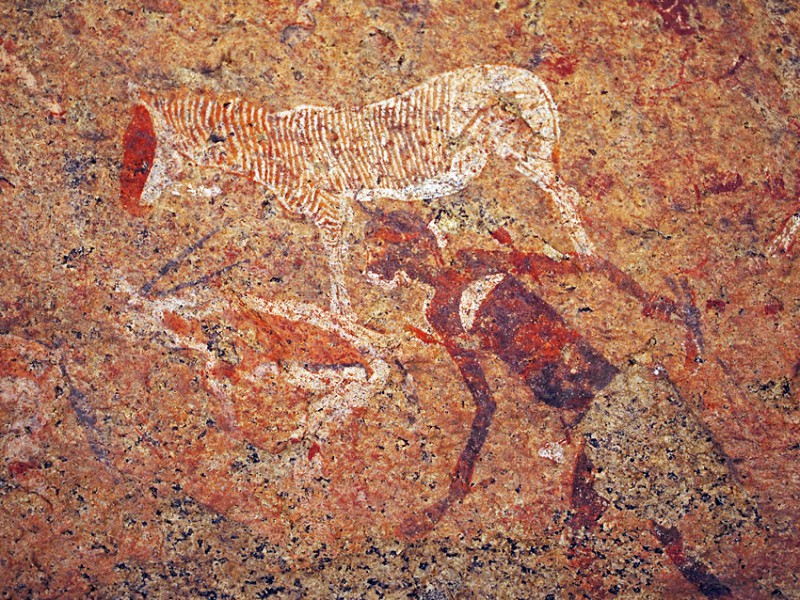 …or men with animal body parts like this man with a head looking like a baboon head. 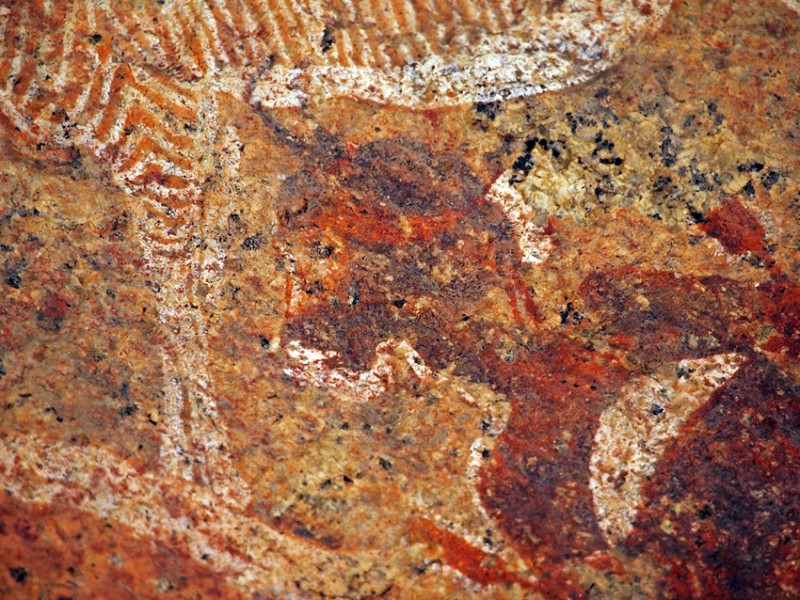 The sweat from the dancers had the powers of these animals. In some paintings you see striped animals and the first idea may be that it is a zebra but some animals are clearly not and the stripes are thought to be sweat, not zebra stripes. 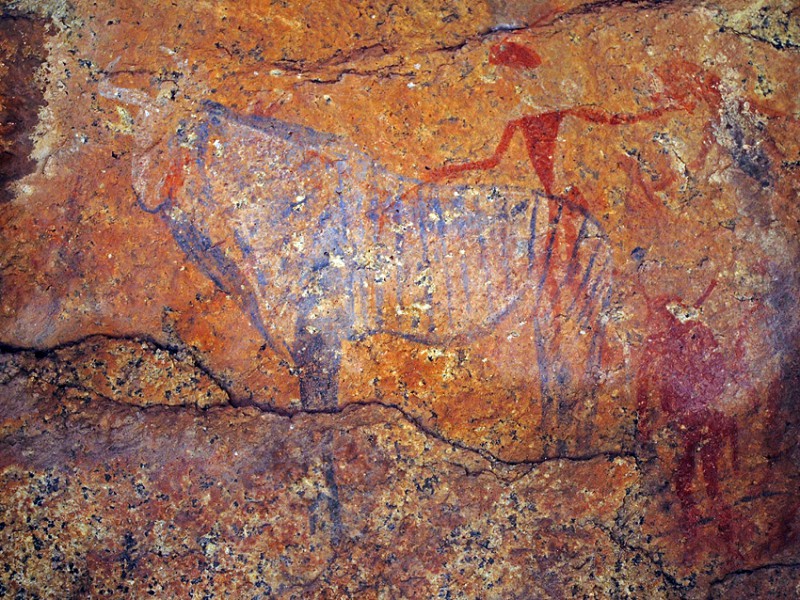 There are very few paintings of hunting scenes which is another proof that the animals in the paintings are transformed men rather than animals. The animals depicted are not common in the Brandberg area.

Austrian designer and artist Harald Pager documented rock paintings in southern Africa using black and white photos and oil paint. He began his documentation in Brandberg in 1977 and continued for almost eight years. He died in 1985 and had by that time documented some 43 000 individual paintings at 879 sites.