During the 1860’s the Swede Charles Anderson was running a trading station in Otjimbingwe, situated on the road between Walvis bay and Windhoek. In Otjimbingwe you also found two Herero leaders with their people.

One was Wilhelm Zeraua (seen above with two daughters), the other Maharero. In 1863 Zeraua was meant to become the supreme Herero leader but declined, leaving the supremacy to Maharero.

In 1867 Charles Anderson died and later the same year Oorlam-leader Jonker Afrikaner led an attack on Otjimbingwe. This was also a year of severe draught and this in combination with the attack could explain why Zeraua decided to move north to settle on the banks of the Omaruru river. At about the same time Maharero left Otjimbingwe to establish in Okahandja. At the same time Axel Eriksson, Charles Anderson’s companion, also moved to Omaruru. 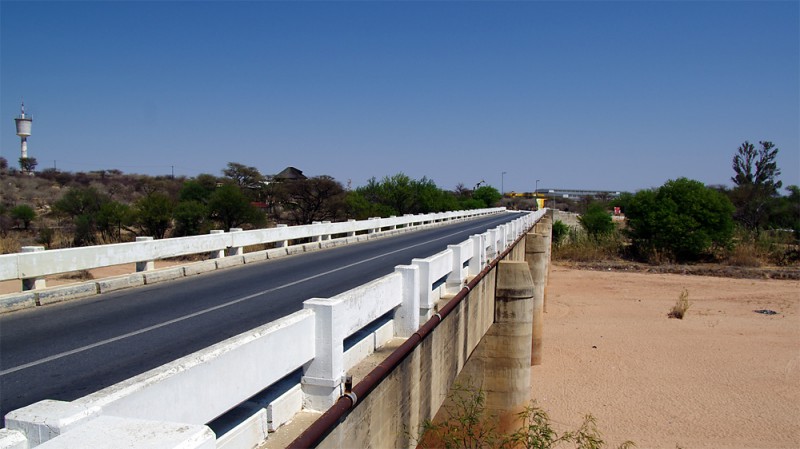 When you today enter Omaruru from the south you come to this large bridge over the wide river bed of the Omaruru river. 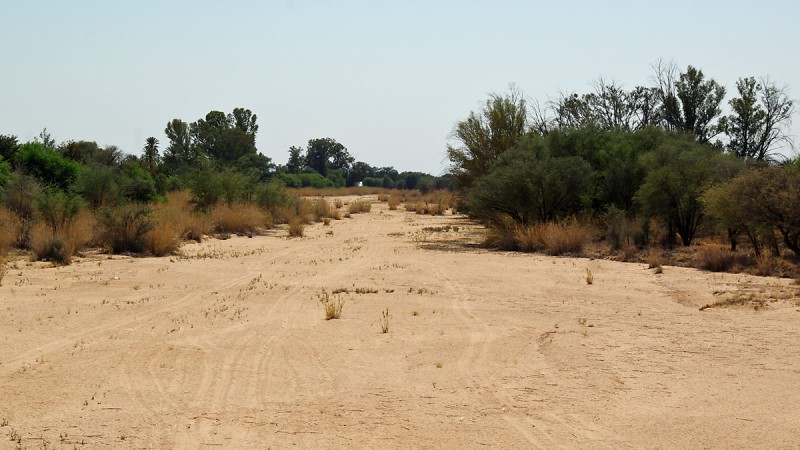 Picture above is standing on the bridge, looking north = upstream. From this view the left side is where Zeraua told the whites (mostly Swedes in those days) to settle. On the right side (this view) Zeraua and his people settled in some 50 huts. Willem Zeraua himself had a brick house. 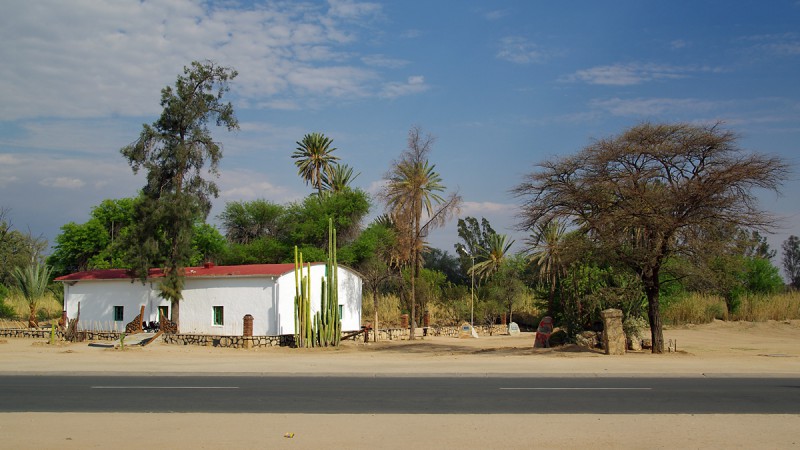 If you cross the bridge and follow the main road (today named Wilhelm Zeraua Road) you will soon see this house. It was once the mission station that German missionary Viehe built in 1871. It is today the local museum, said to be open Monday-Friday but if you come on a weekend as we did I suggest you contact Chris on Evening Shade and he will assist with getting the keys for a weekend visit! 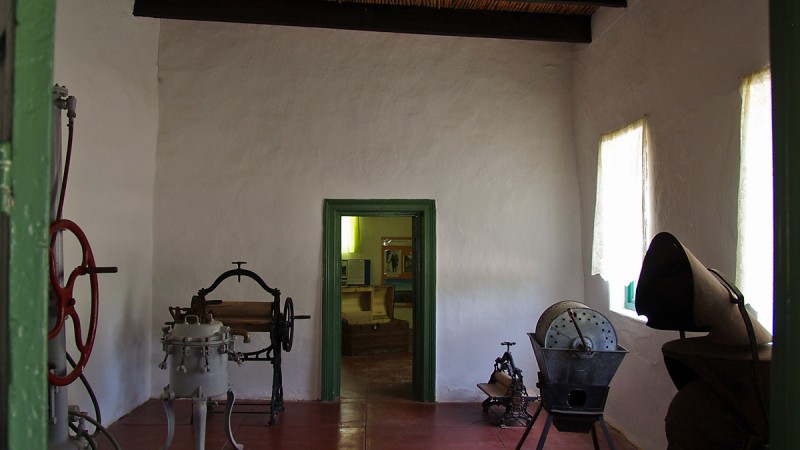 This house was originally a mission house but has during the years also been used as a school, sick bay, postal agency and hostel. Visiting the museum you will find a few objects but mostly photos and text telling about the early history of Omaruru. 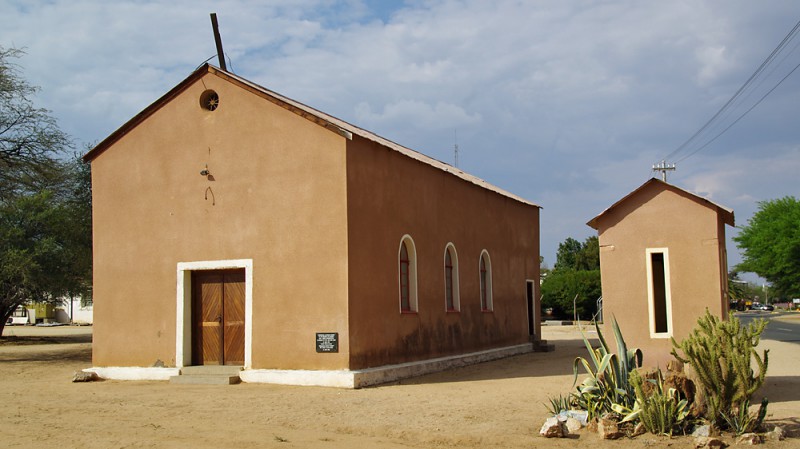 Opposite the mission house/museum you will find the old Evangelical Lutheran Church. The first entry in the church register is the marriage between Axel Eriksson and Fanny Stewardson on 18 September 1871. At that time the Church building was not ready so the ceremony was held in the school house by Missionary Viehe. The Church was opened for Advent in 1873. 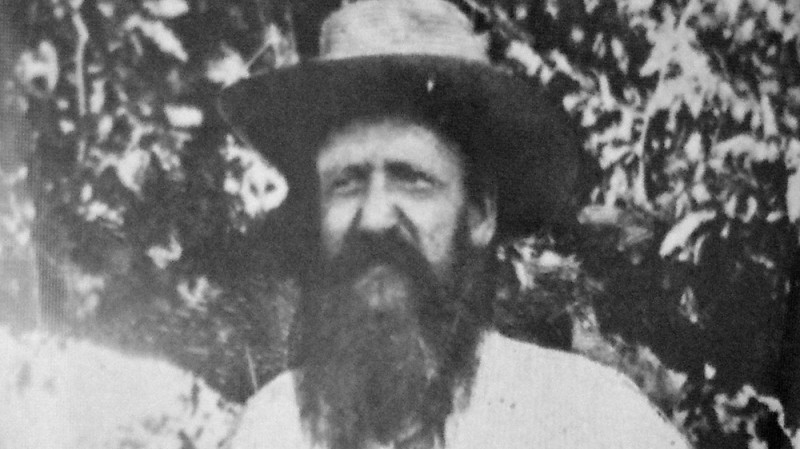 Above is Axel who was a truly remarkable man. He came to South West Africa in 1866 at the age of 20. He came to Omaruru in 1870. Three Swedes had entered partnership to form a company. They were Anders Ohlsson (merchant and importer in Cape Town), Thure Een (sea captain) and Axel Eriksson. Een was the first manager of the trading store in Omaruru but returned to Sweden in 1871. That left Eriksson, then only 25 years old in sole charge of the partnership business in Omaruru.

I have read several books where Axel is mentioned and everyone seems to agree that this was a very special and good man. He made friends with all nationalities, including people of several Namibian indigenous groups. He also spend a lot of money helping people – white hunters and traders but also Hereros and Ovambos. All too often he did not get his money back and although he was a very wealthy man for a while he died almost poor. He had a farm at Aukas, near Grootfontein, where he died in 1901. 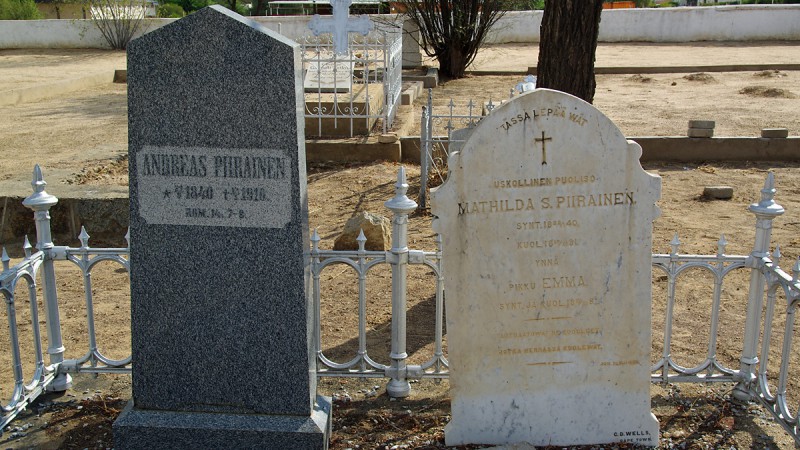 Next to the old church is the old cemetery. Surely Swedes must have been buried here but I could find no Swedish graves. In the early 1870’s there were some 20 Swedes in Omaruru and later as much as 40. Above is the tomb stones of a Finnish couple, Andreas and Mathilda Piirainen. Andreas (Antti) Piirainen was a Swedish-speaking Finn who came to Omaruru in 1874. He was a craftsman who managed material affairs for the Finnish mission in Ovamboland. He had a store in Omaruru that he had built around two large camel-thorn trees and he used the trees to hang some of his articles on the branches. 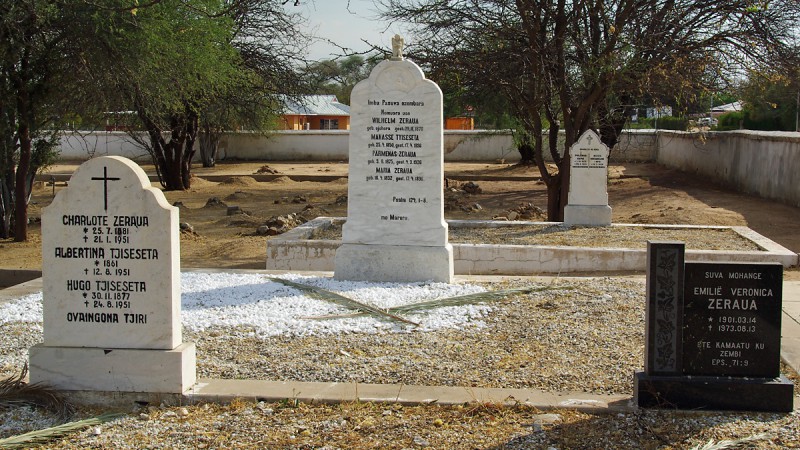 Above, in the middle you can see the Tomb stone of Wilhelm Zeraua. He became a Christian shortly before his death in 1876. He was thus buried in a coffin in this cemetery and to the Hereros 1876 is “the year of the coffin”. On the picture on top of this post you see Wilhelm Zeraua with his two daughters Albertina and Charlotte. The daughters’ tomb stone can also be seen in the picture above. 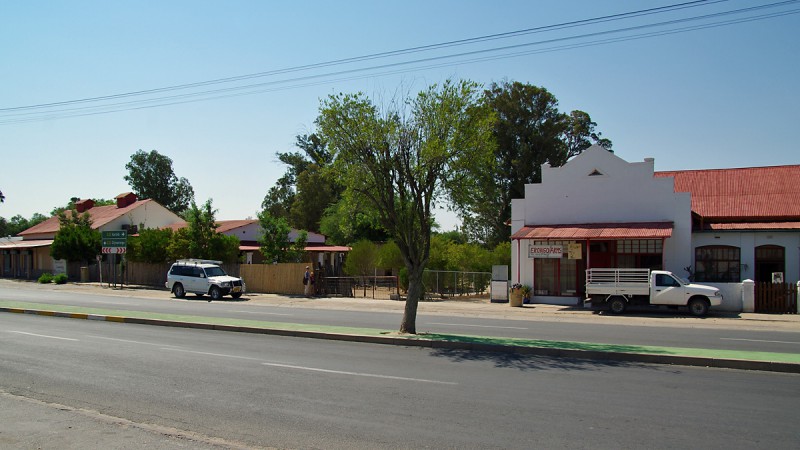 Axel Eriksson had his store some distance upstream from the Mission station. The store was built on a slope and in that building Een and Eriksson also had their homes. The other Swedes lived below, closer to the river bed. Today I do not think much is remaining but I was able to find one of the old Swedish houses. Very close to the Evening Shade, between the “Pep store” and the “Erongo arms” is a small and insignificant building. 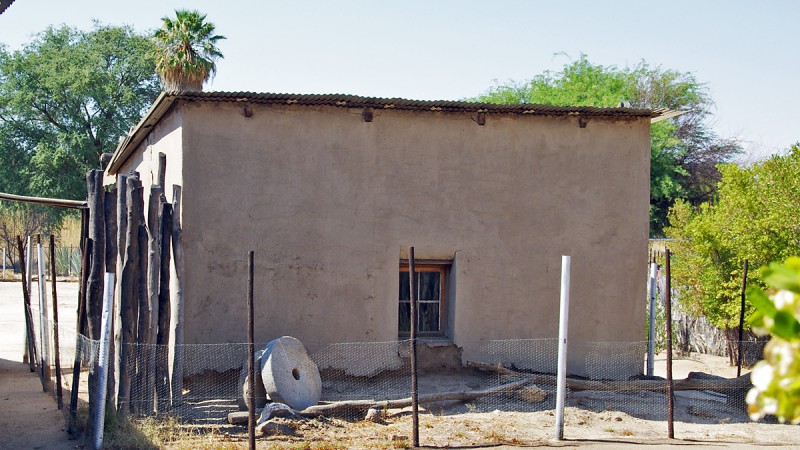 This house was built by Een in 1870 or 1871. He made it with “fire-proof walls thick enough to withstand rifle bullets”. Een wanted the house to be a gathering place where people could rest after journeys and find refuge in times of hostilities. Later Een sold the house to Oscar Lindholm. Lindholm had come to South West Africa already in 1854. In Otjimbingwe he had been a wagon-maker and black-smith and also managed Anderson’s store. He was one of the first Swedes to come to Omaruru in 1868 to establish the new trading station. After Een left in 1871 he became the manager of Eriksson’s store in Omaruru. Oscar married Elizabeth Stewardson, older sister of Axel’s wife Fanny. This house is today known as Lindholm’s house. One can only wish that it will be taken care of and renovated.

As South West Africa became a German protectorate and colony in 1884 things started to change. The Swedish group had appreciated the freedom of life in Namibia, they had been able to establish peaceful and fruitful connections with the indigenous population. Eriksson even had a son called Jacob who via his mother was the grandson of the mighty Herero chief Kambazembi and also the nephew of Maharero, the Paramount Chief of the Herero. Jacob later became cattle farmer in the south of Angola and had several cattle-posts in Kaokoland. 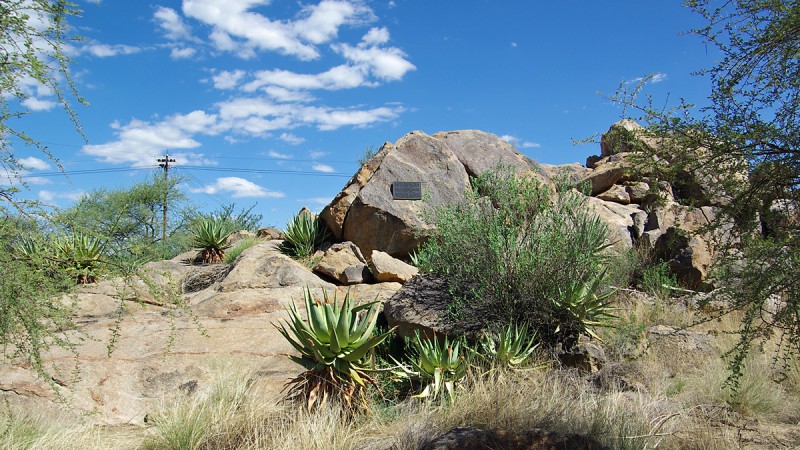 With the new German leadership Eriksson and the other Swedes found life more difficult. In Omaruru the population became more German than Swedish and German farmers established cattle farms where the Hereros used to stay.

When the war between the Germans and Hereros started in 1904 Omaruru was attacked and surrounded by Herero warriors. The local garrison had left town and was 400 km to the south. The commander of the Omaruru Company, Captain Victor Franke, got news of the uprising via heliograph and immediately returned. In only twenty days he had his men march 900 km. He first managed to relief Windhoek, then Okahandja and finally managed to break through the ring around Omaruru to free the settlers. On the southern side of the river you can find the rock pictured above that marks the place of the battle. 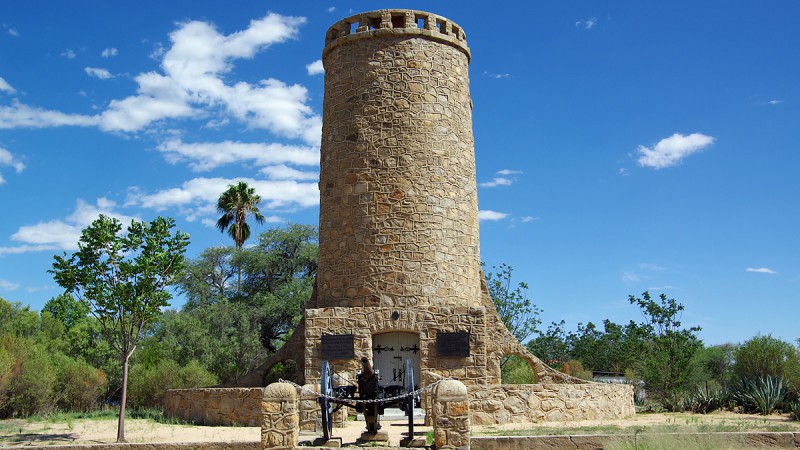 Later the Germans defeated the Hereros in the battle of Waterberg, August 1904 and the German leader von Trotha issued his infamous extermination order: “Any Herero found inside the German frontier, with or without a gun or cattle, will be executed. I shall spare neither women nor children.” There are estimates of between 24 000 up to 100 000 hereros killed. In 1985, the United Nations’ Whitaker Report classified the aftermath as an attempt to exterminate the Herero and Nama peoples of South-West Africa, and therefore one of the earliest attempts at genocide in the 20th century. The German government recognised and apologised for the events in 2004, but has ruled out financial compensation for the victims’ descendants.

In 1907 Omaruru built a watchtower to have a good strategic position for future attacks. It was named Franke Tower in honour of Captain Viktor Franke. It was opened in 1908 and declared a national monument in 1963. You will find the tower close to the rock, not far from the Kashana lodge. 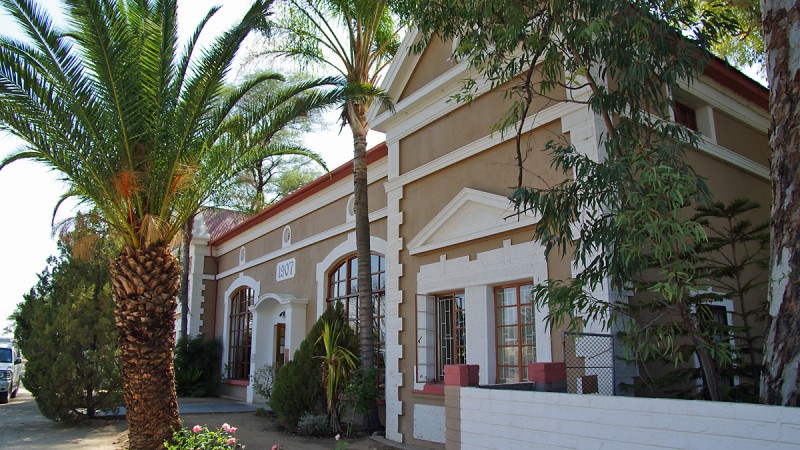 Above is the Wronsky house, built in 1907. Here you can find a souvenir shop, a café and also a small photo exhibition describing the history of the town. 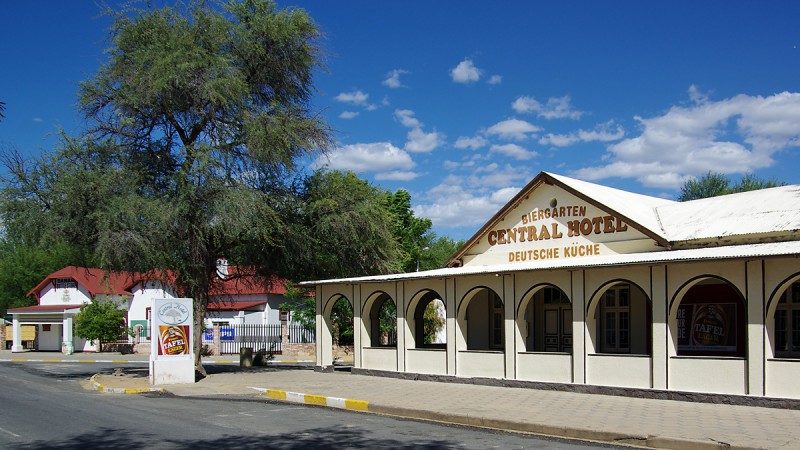 The descendants of Lothar von Trotha and the von Trotha family travelled to Omaruru in October 2007 by invitation of the royal Herero chiefs and publicly apologised for his role in the Herero Genocide. Member of the family Wolf-Thilo von Trotha: “We, the von Trotha family, are deeply ashamed of the terrible events that took place 100 years ago. Human rights were grossly abused that time.” 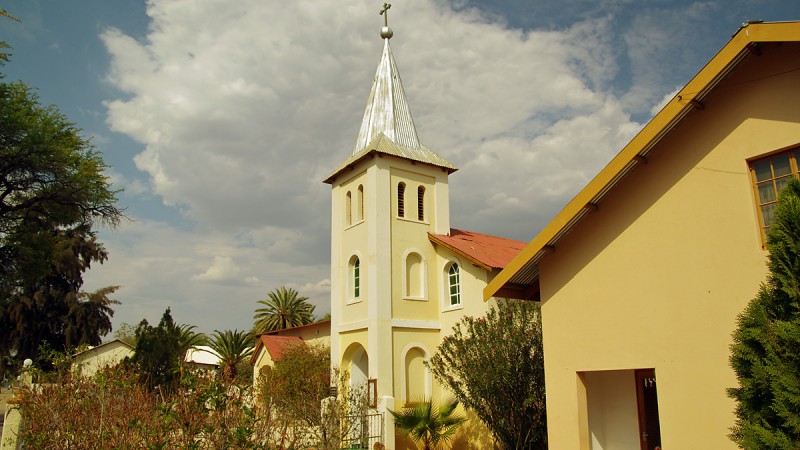 Today you find lot of interesting buildings in Omaruru with shops, cafés and restaurants. 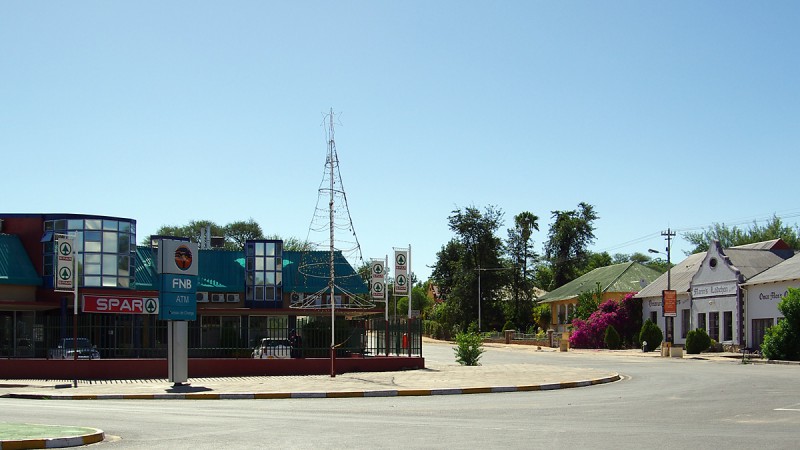 Omaruru is a mixture of the old and the new and the town has some 14 000 inhabitants. 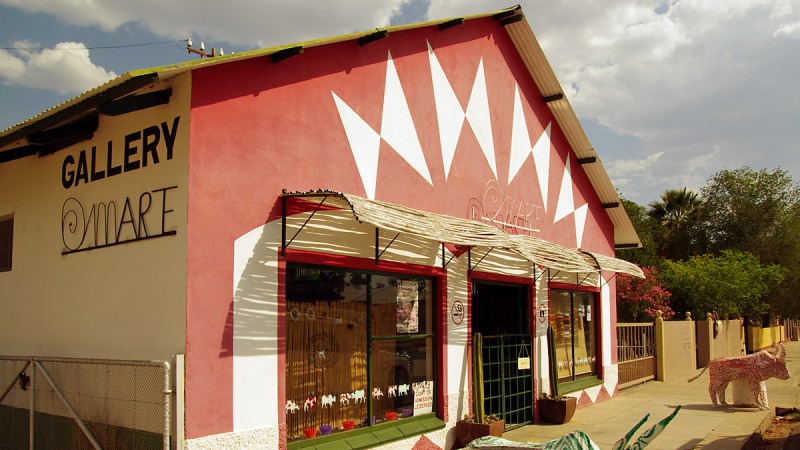 In the last decade or so Omaruru has become something of a haven for those of an artistic nature. True to its creative roots Omaruru produces several fine products including chocolate, cheese and wine. 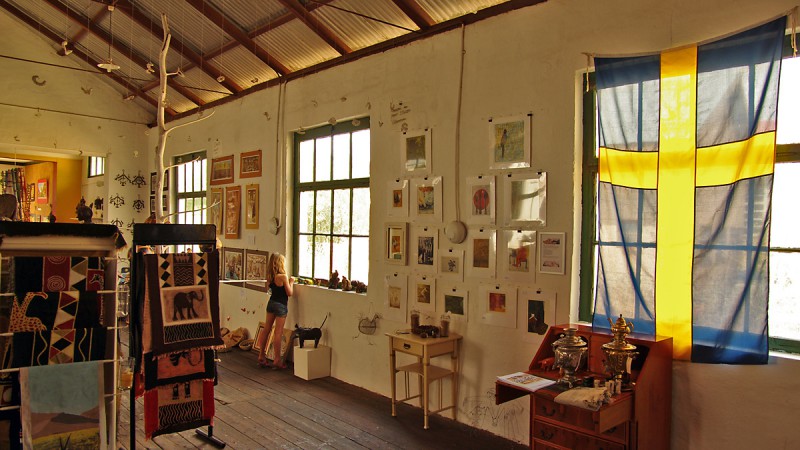 Since 2001 Omaruru has established a partnership with the Swedish town Vänersborg, the town where Axel Eriksson was born. 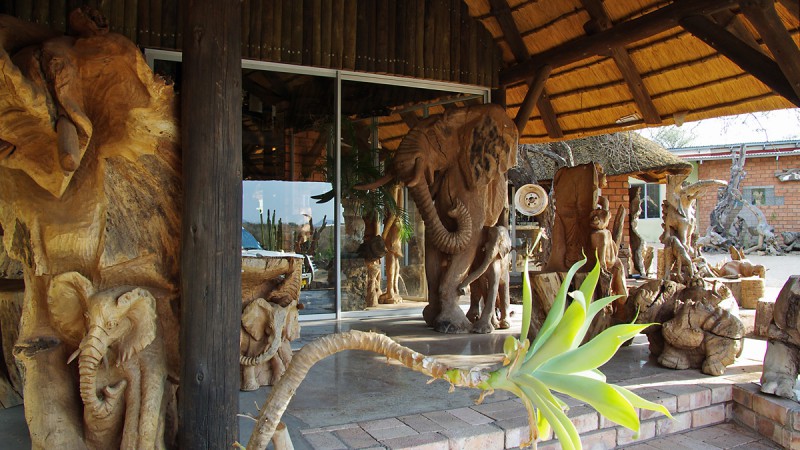 At the entrance of the town you will find a large store specialised in wood carvings.

I will be back soon with two posts describing places in Omaruru for sleeping and eating:

Kashana and the Evening Shade!

63 Responses to Omaruru, the old Swedish town in Namibia