The last part of our Scenic Flight… 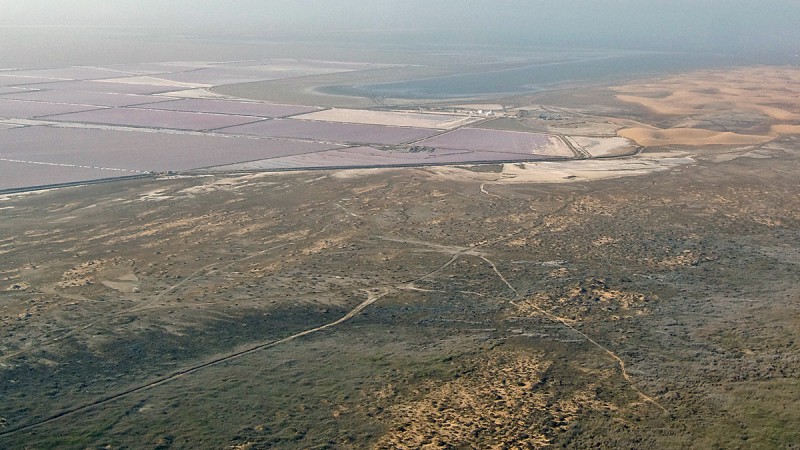 We approached Walvis Bay from the south first seeing the salt pans. They were established in 1964 and are one of the largest solar evaporation facilities in Africa with an area of 4,500 hectares. Thirty million tonnes of seawater is processed per year to produce about 750,000 tonnes of high quality salt. 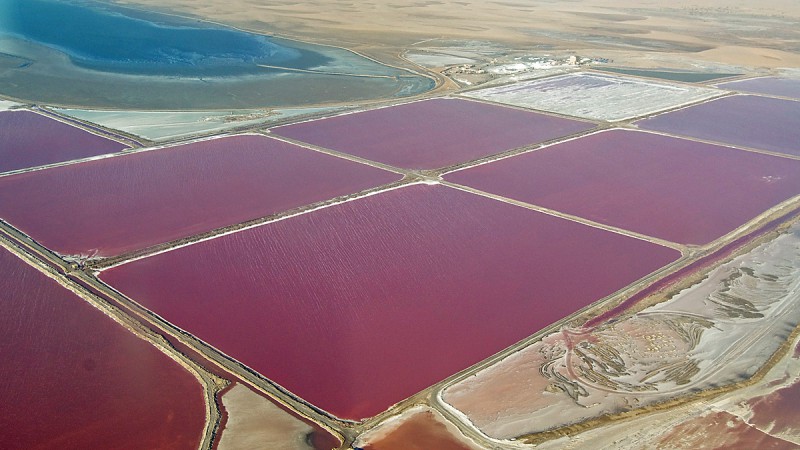 The red colour comes from the Halobacteria. In the operation of the ponds the colour is important because it increases the heat absorption of sunlight, increasing the temperature of the water and also the evaporation rate. This bacteria is also found in the blue green algae on which both the Lesser and Greater Flamingos feed and this is what gives the pink-redish colour to the flamingos! 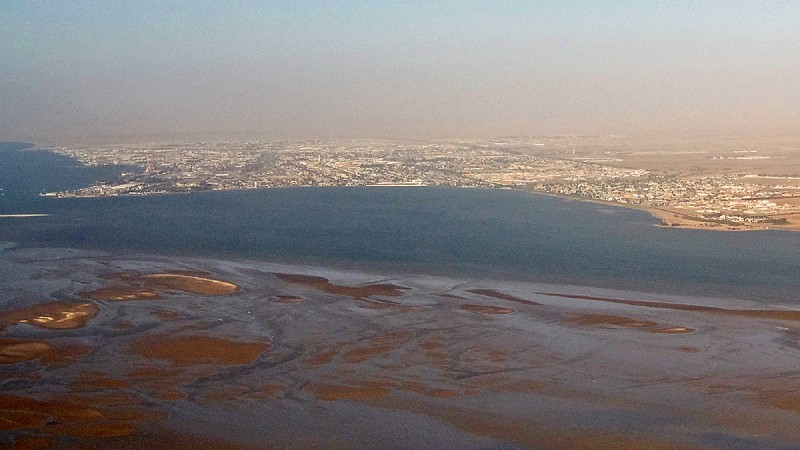 In the southern part of Walvis Bay is the Walvis Bay Lagoon. It protects the harbour but also creates one of the richest and most important wetlands in southern Africa. Here you find large amounts of Flamingos and other birds. 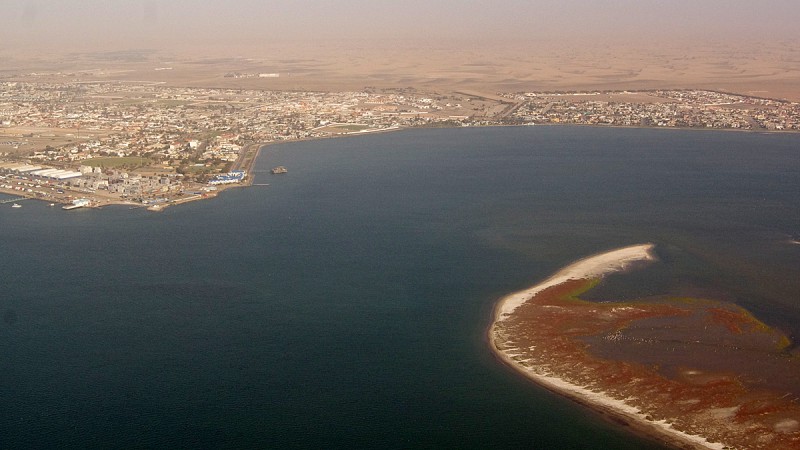 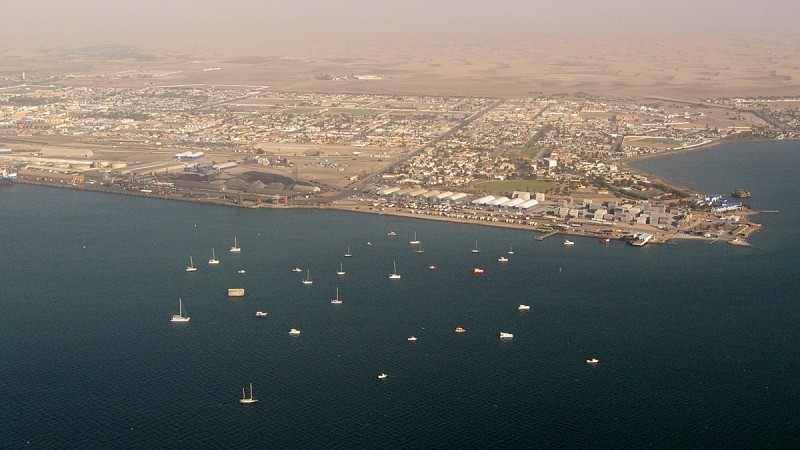 Walvis Bay, meaning “Whale Bay” in Afrikaans, had the Topnaars as the first settlers since the early Stone Age. It was “discovered” by Diaz, a Portuguese explorer as early as 1487 and was founded in 1793 by the Cape Dutch. Only two years later it was annexed by the British and in 1910, Walvis Bay became – like the entire Cape Colony of the present day South Africa – part of the South African Union. Walvis Bay being the only deep sea harbour on the Namibian coast, remained under South African rule even after Namibia’s independence and only in 1994 was it handed over to Namibia. 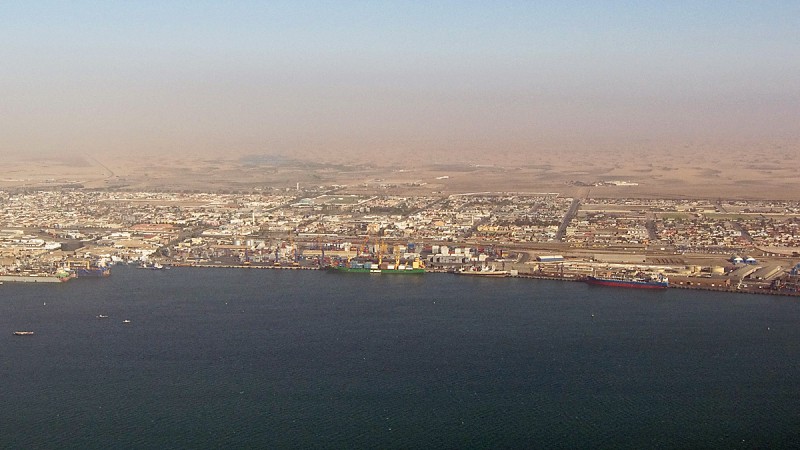 Walvis Bay is linked to the rest of Africa via the Trans-Kalahari and Trans-Caprivi Highways. These two highways play an important role in the “Walvis Bay Corridor”; a concept marketed to attract more transport business through the port of Walvis Bay. 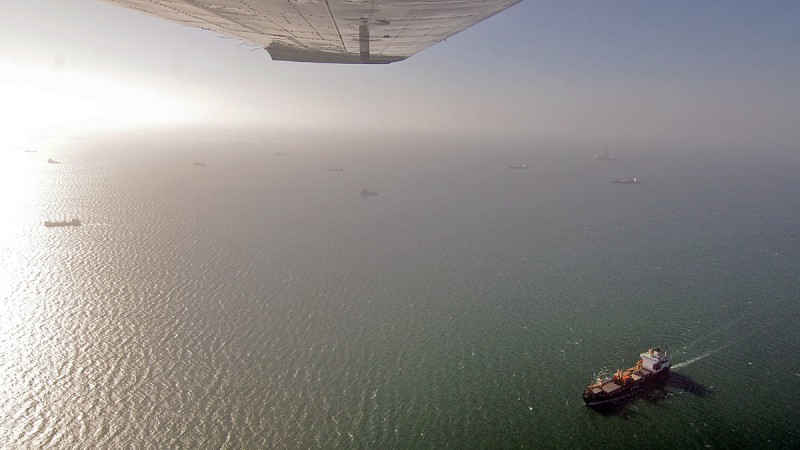 Walvis Bay acts as a as a hub port to the West Coast of Africa and via it several countries gain access to the world markets saving several days when shipping to the European and American markets. 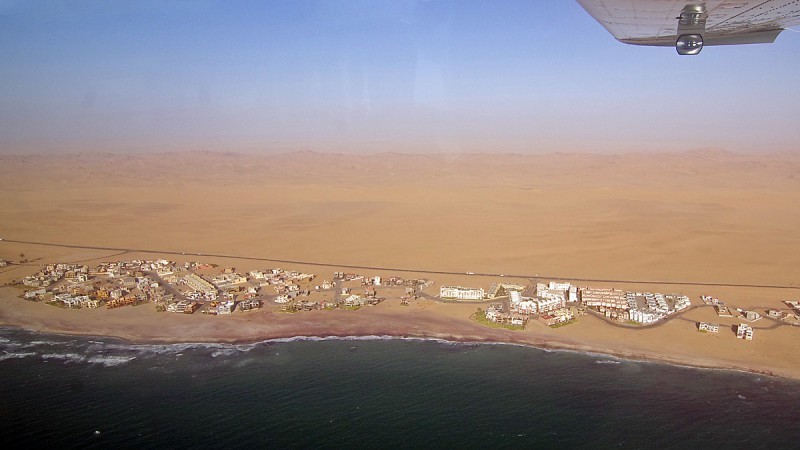 Only 30 km north of Walvis Bay is Swakopmund. Between the two cities is an area of sand dunes and the road between twe two cities run close to the beech, west of the high dunes. On this stretch of road new settlements are being established. 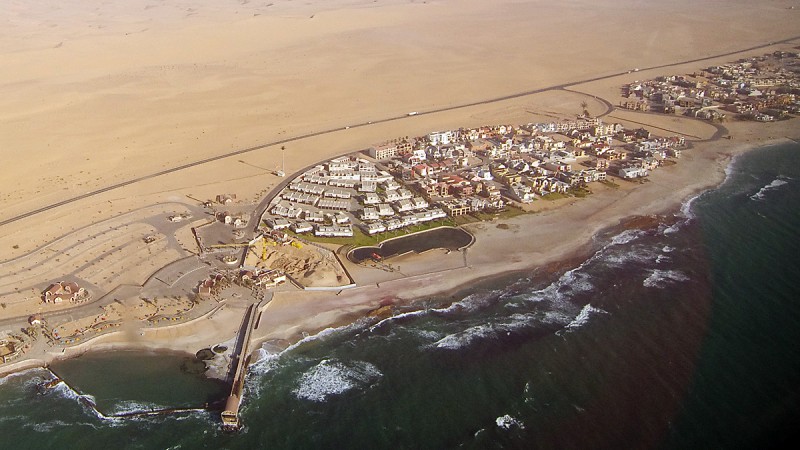 Every time you visit you will find new houses are being built. A house at the coast is a dream for many Namibians. 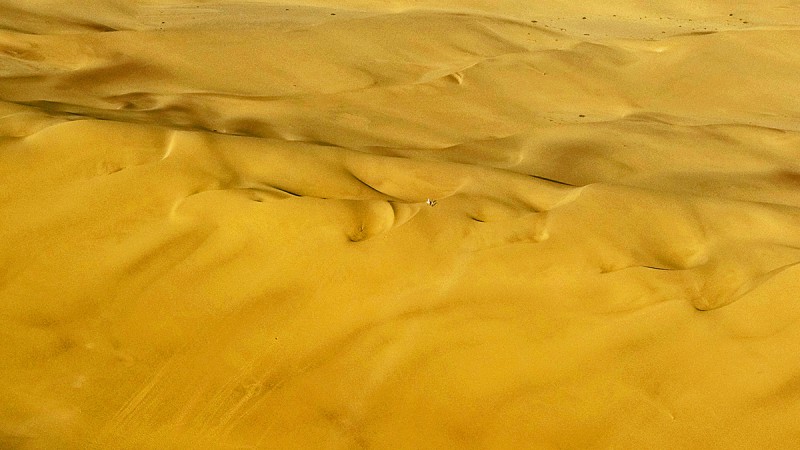 Do you see the small group of people on the top of the dune? 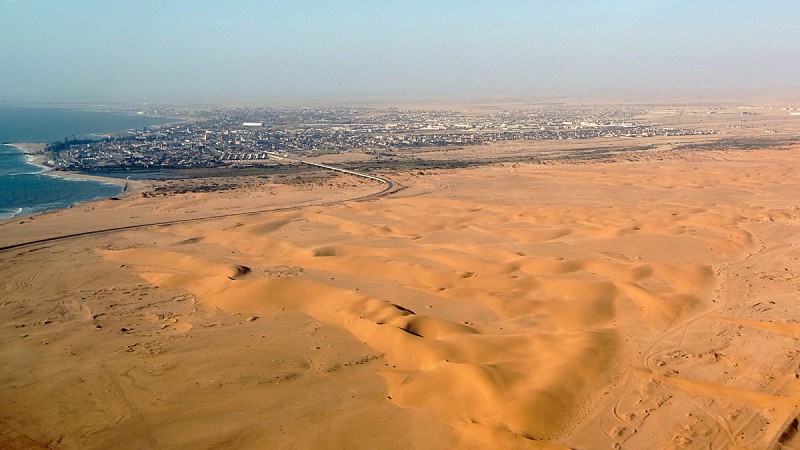 Approaching Swakopmund you see it is a coastal town surrounded by the desert. South of it is the mouth of river Swakop and that explains the name of the town. 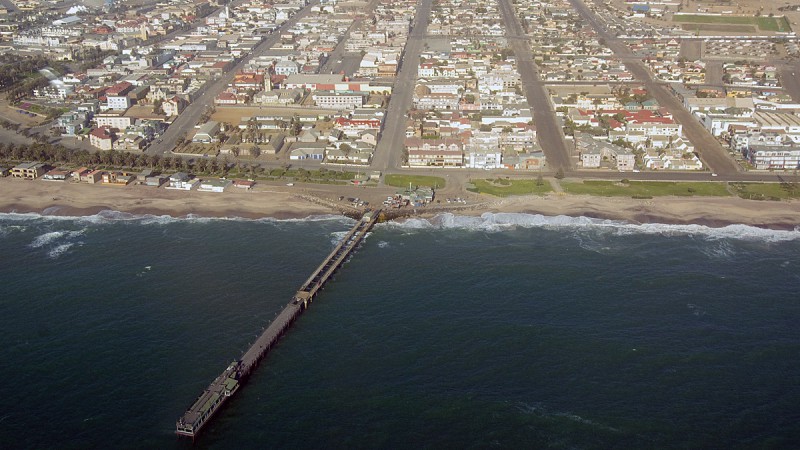 In 1884 South-West Africa (now Namibia) became a German colony. The only harbour in Walvis Bay belonged to the British so in 1892 Swakopmund was founded as the main harbour for the Imperial German colony.

The original harbour was at the Mole (see below) but in 1914 construction of a steel jetty was commenced. It was renovated in 2006 and today you find a restaurant at the end of it with another one – the Tug – at its hold. 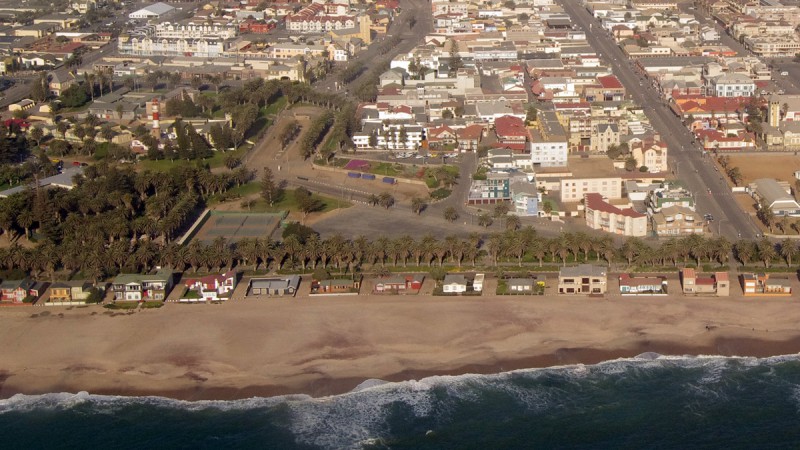 The road to the right is the Sam Nujoma Avenue (previously named Kaiser Wilhelm). In the centre of the picture is an open area where you often find street-shopping of local craft. Behind this area is Hotel Rapmund, a nicely prized and central place to stay. Next to it is Hotel Schweizer House with its very nice café. 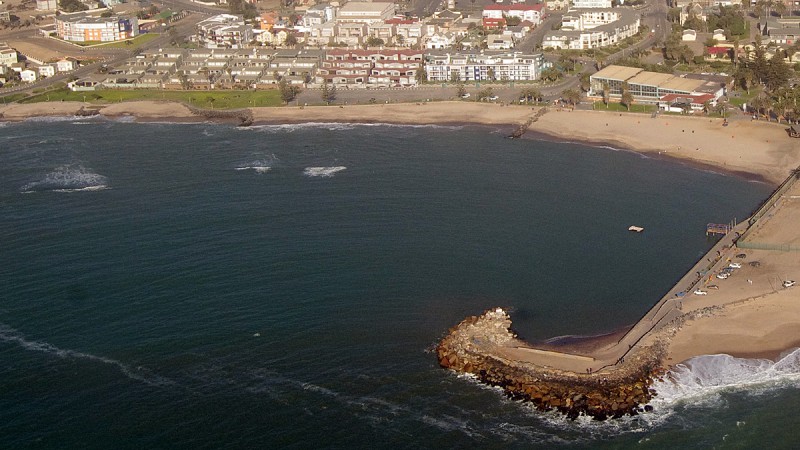 Above is the Mole where the original harbour was. Today this is a popular place for swimming and surfing and on the beech you find a nice local museum, bars and restaurants. 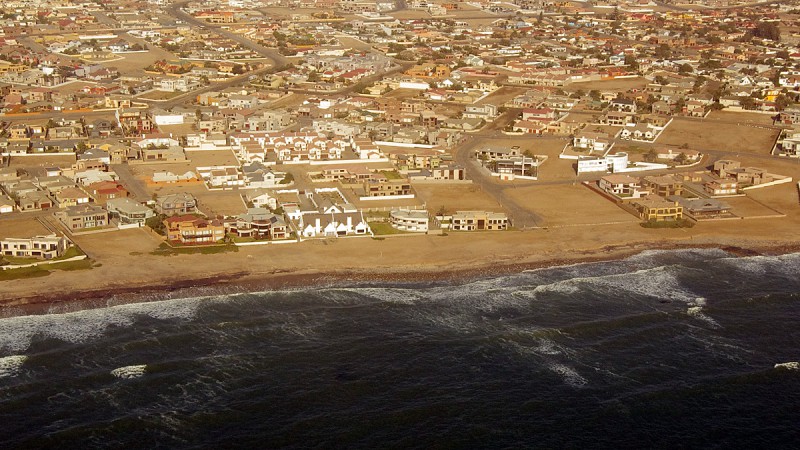 Further north is a new area for big villas along the beech. We have stayed here a few times. 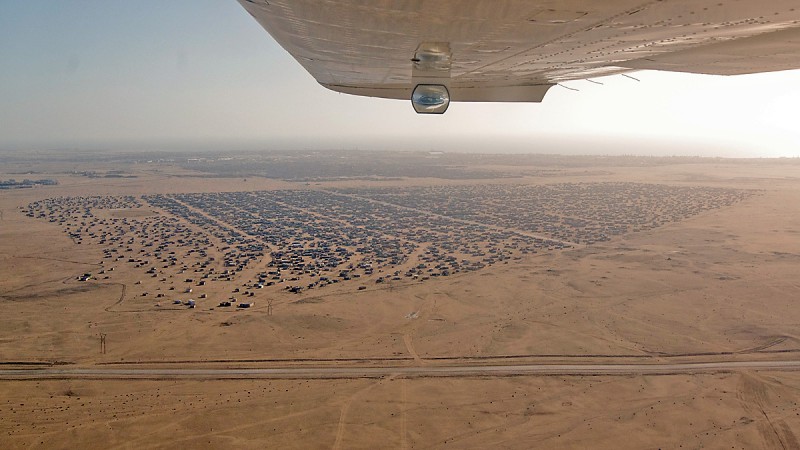 Turning off the coast for the airport we passed this shanty-town built in the desert just outside town. Swakopmund has more than 40 000 inhabitants. The living standard is very different for different groups… 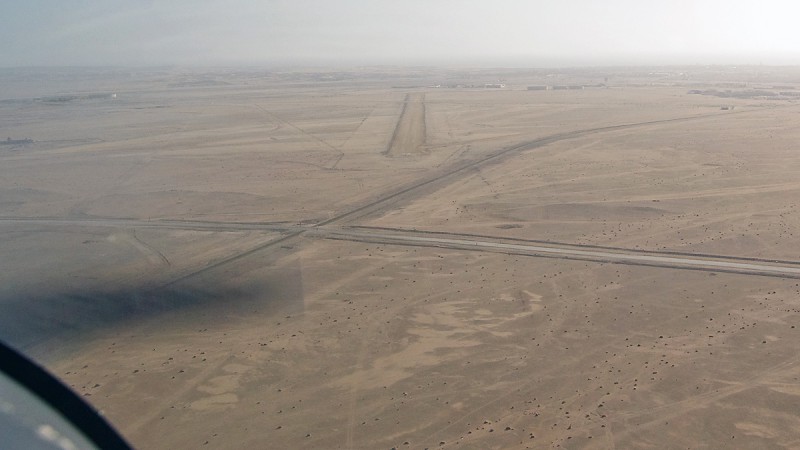 On final for landing at Swakopmund airport. They say you have not really seen Namibia if you have not seen it from the air. There is something in that saying…